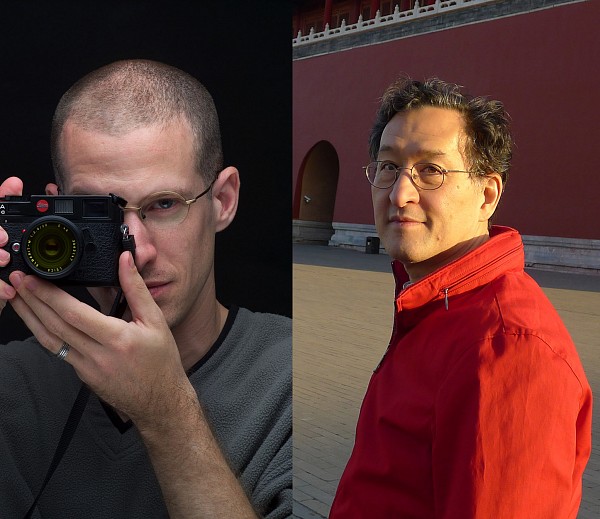 The unbroken Chinese ink painting tradition that has been perfected over the course of more than a millennium of history continues its evolution into the present day, as evidenced by the current popularity of contemporary ink. As Chinese contemporary art has gained prominence over the past couple of decades, there has been a dichotomy between purely contemporary works and works with a stronger connection to tradition. This division seems to be shrinking as traditional aesthetics begins to merge with newer media in more harmonious ways. The collaborative work of Arnold Chang and Michael Cherney is a particularly vivid example of this phenomenon.

Both Chang and Cherney are hybrid artists. Chang is of Chinese and Western heritage; his strong foundation in traditional ink painting is balanced by myriad Western art influences. Cherney has been based in China for many years; his work centers around combining photography with the subject matter, aesthetics, materials and formats most closely associated with traditional Chinese ink painting.

Since 2009, Chang and Cherney have been experimenting at merging traditional ink with photography in a manner that remains true to the essence of traditional Chinese landscape yet also brings both media forward; in a manner that creates something greater than the sum of its parts. At the edges where two worlds meet, where film grain and ink dots come together, they are able to look beyond rigid categorization; beyond specific cultures, definitions, borders and geographies.

The title “From Two Arises Three (二生三)” comes from the Tao Te Ching (Daodejing), describing how the works of two artists allow for the creation of a third space:

The Tao gave birth to One.

One gave birth to Two.

Arnold and Michael will talk about their collaborative and solo works at NanHai Art. There is an exhibition scheduled to open at the Asian Art Museum in San Francisco on July 15th, 2014.

One would be hard-pressed to find a “more Chinese” artist than Qiu Mai (b. 1969). Photographer, calligrapher, and book artist, Qiu Mai’s work is done with the great sophistication that draws on the subtleties of China’s most scholarly and esoteric traditions. Based in Beijing and a successful artist whose works have been collected by The Metropolitan Museum of Art’s Department of Asian Art (the first photographic works ever to enter the collection of that department), Qiu Mai’s art is less provocative than it is intellectually engaging, meditative, and often simply beautiful.  What is provocative is his identity:  Qiu Mai is the Chinese name for Michael Cherney, born in New York of Jewish parentage. Cherney’s work is the cutting-edge demonstration of artistic globalization:  if Asian artists can so readily “come West,” then what is to prevent large numbers of future Western artists from “going Asian”? Or, like Qiu Mai/Michael Cherney, going both ways at once, both American and Chinese, modern and traditional.

He has previously taught Chinese art at the University of Colorado and San Francisco City College, Connecticut College, and Arizona State University, has organized several exhibitions, and is the author of a book, and numerous exhibition catalogues and articles on Chinese painting. Chang served for many years as Vice President and Director of Chinese Paintings at Sotheby’s, and was formerly a painting specialist at Kaikodo in New York.