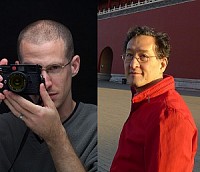 Chang has previously taught Chinese art at the University of Colorado and San Francisco City College, Arizona State University, and Columbia University. He has organized several exhibitions, and is the author of a book, and numerous exhibition catalogues and articles on Chinese painting. Chang served for many years as Vice President and Director of Chinese Paintings at Sotheby’s, and was formerly a painting specialist at Kaikodo in New York. He is currently Senior Consultant for Chinese Paintings at Sotheby's.

One would be hard-pressed to find a “more Chinese” artist than Qiu Mai (b. 1969). Photographer, calligrapher, and book artist, Qiu Mai’s work is done with the great sophistication that draws on the subtleties of China’s most scholarly and esoteric traditions. Based in Beijing and a successful artist whose works have been collected by The Metropolitan Museum of Art’s Department of Asian Art (the first photographic works ever to enter the collection of that department), Qiu Mai’s art is less provocative than it is intellectually engaging, meditative, and often simply beautiful.  What is provocative is his identity:  Qiu Mai is the Chinese name for Michael Cherney, born in New York of Jewish parentage. Cherney’s work is the cutting-edge demonstration of artistic globalization:  if Asian artists can so readily “come West,” then what is to prevent large numbers of future Western artists from “going Asian”? Or, like Qiu Mai/Michael Cherney, going both ways at once, both American and Chinese, modern and traditional. – Jerome Silbergeld, P. Y. and Kinmay W. Tang Professor (Emeritus) of Chinese Art History, Princeton University