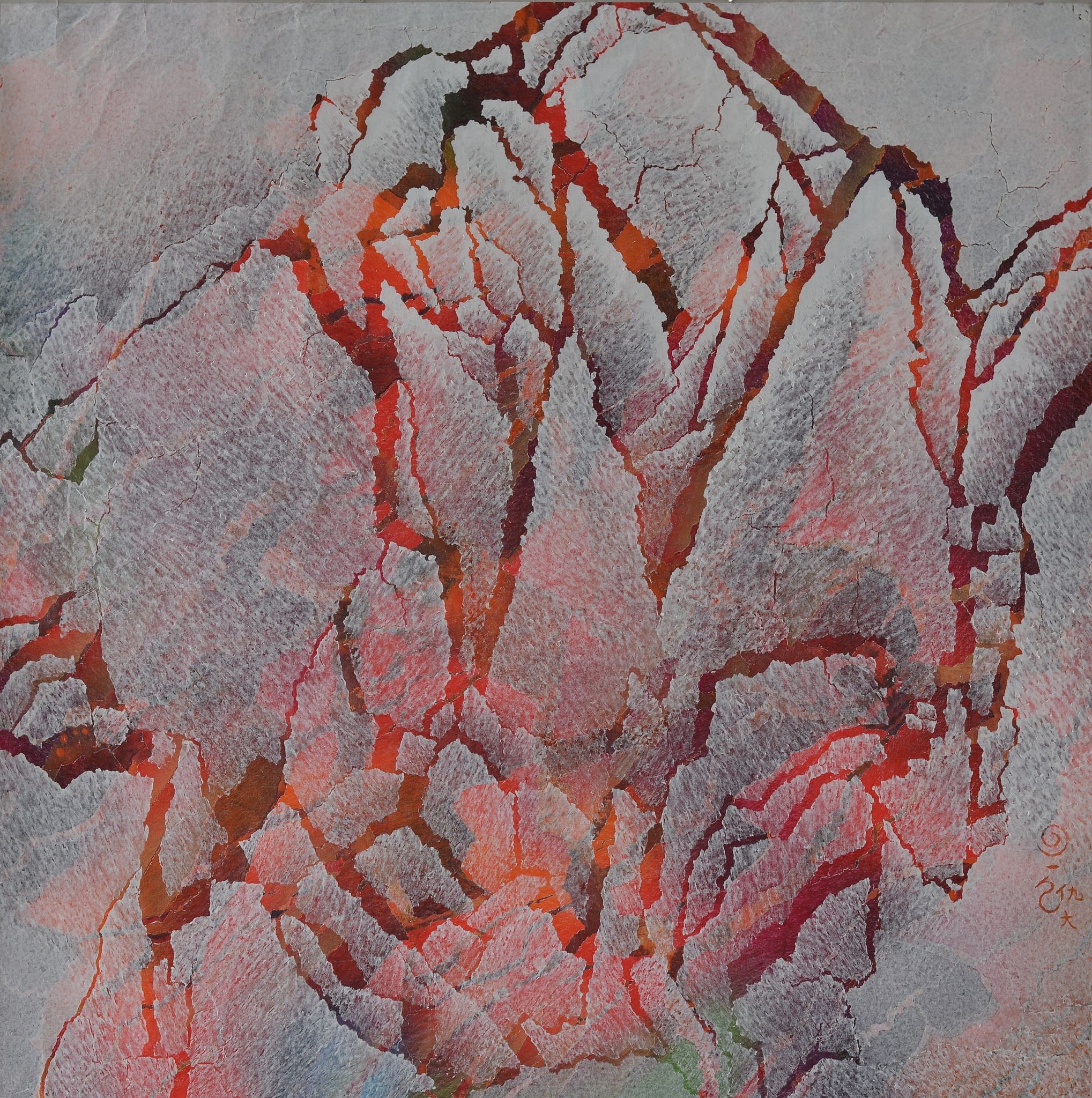 September 4, 2015 (San Francisco, CA) – NanHai Art is pleased to present a solo exhibition of 11 works by Shanghai based artist, Qiu Deshu. Over his lengthy career, the artist has become recognized for his work that recontextualizes traditional Chinese ink painting, particularly through the artist’s signature technique of “fissure” painting, discovered by Qiu in the 1980s and developed over the following decades. NanHai Art will celebrate the opening of this exhibition on October 2nd, with a reception from 5:00-6:00 p.m., at their Millbrae gallery (510 Broadway) timed to coincide with inaugural Asia Week San Francisco Bay Area festivities.

The 11 paintings in this exhibition have a production period from 2005-2014 and represent the most recent iterations of Qiu’s breakthrough style of “fissuring,” in which he paints and tears Xuan rice paper, rearranging and mounting the paper fragments on a base layer in cracked compositions. This effect is enhanced by the artist, who builds upon the arrangements through various manipulations of the paper, including rubbing or grinding it into the canvas.

Some of these works, such as Fissure–Gathered Colors (2009) and Fissure–Formidable Peaks (2009), mimic the traditional style of Chinese landscape painting with the jagged cracks forming the silhouettes of mountain ranges. These figurative pieces make up the most colorful works in the show, with mountains rendered in muted sage green stippled against bright strokes of flame red and cobalt blue in a layered effect that mimics atmospheric haze.

Other pieces, such as Fissure–Fissure and Reconstruction (2014) and Fissure–Fissure Landscape No. 2 (2006), are much starker—black, white and gray compositions that emphasize the crack in the canvas itself in scrolling or calligraphy like designs. While minimalist by comparison to Qiu’s other, mountainous pieces, closer inspection yields a look at substantive depth, evocative of another natural feature: the crevasse, which is, by definition, the implosive counterpart to a mountain range. In all these iterations, the fissure itself informs the basis of Qiu’s practice, which has become a metaphor for destruction, rejuvenation and transcendence for the artist.

This theme is intensely personal to the artist, who endured political persecution for his seminal role in the 1979 organization of the Caocao (Grass) Group of Chinese painters, one of China’s first experimental art societies. As the group’s primary leader, Qiu was subjected to public and private criticism and enormous political pressure. It was in 1982, at the height of this political conflict and shortly after the artist was exposed to the work of Jackson Pollock in a revolutionary exhibition of Western abstract art, that Qiu was struck by the cracks in the pavement he walked on. His feelings of subjugation and personal destruction seemed to crystalize in the deteriorating pavement, but there was relief to be found in this breakdown as well; he sensed it indicated new opportunities and the beginning of an alternative for himself and his work.

Since then, Qiu threw himself into experimenting with techniques and materials that would allow him to render the organic, freeform lines of a fissure, which had encapsulated both aesthetic and philosophical meaning for the artist. It is the work from that period forward that has defined Qiu’s career, and which he has used henceforth to investigate new possibilities within the medium of ink painting to not only to create visual imagery, but also to offer insights about the shifting role of art in contemporary China and the world around.

Kuiyi Shen is Professor of Art History in the Department of Visual Arts and Director of the Program in Chinese Studies at the University of California, San Diego. His current research focuses on modern and contemporary Chinese art and Sino-Japanese cultural exchange of the early twentieth century. His publications include A Century in Crisis (Guggenheim Museum, New York, 1998), Between the Thunder and the Rain (Asian Art Museum, San Francisco, 2000), The Elegant Gathering (Asian Art Museum, San Francisco, 2006), Chinese Posters (Prestel, Munich, 2009), Blooming in the Shadows (China Institute, New York, 2011), The Art of Modern China (University of California Press, 2012), which was awarded the 2013 Book Prize in Humanities by the International Convention of Asia Scholars, and Light before Dawn (Asia Society, Hong Kong, 2013). He is a recipient of fellowships and awards from the National Endowment for the Arts, Social Science Research Council, Japan Society for the Promotion of Science, Stanford University, and Leiden University.

Tuesday-Saturday, 10 AM-5 PM, and by appointment.