To Speculate, Of Nature 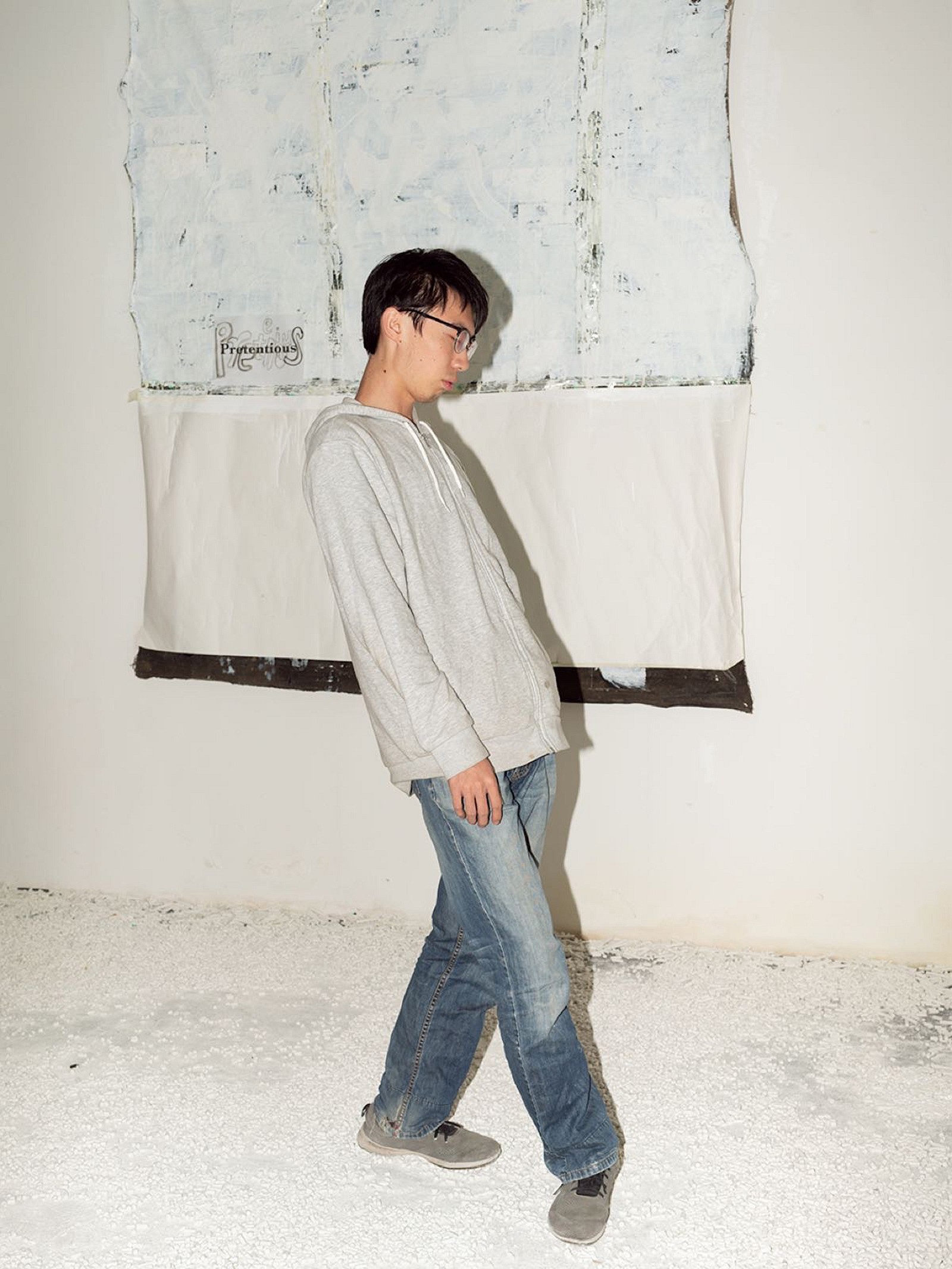 To Speculate, Of Nature

In the history of modern China, some of its greatest artists trained in art schools overseas. In each generation, these artists took with them the great social challenges facing their homeland, learned strange and new artistic skills, and returned home to reinvigorate the nation. Just as it has been for over a century, today a generation of young artists born in the Mainland have been training in the art schools of the United States and Canada—NYU, MIT, RISD, SFAI, Simon Fraser University, Columbia—and jockeying in the art world centered in New York city and its many far-flung sites of artistic practice. Nanhai Gallery in this exhibition presents five artists in the midst of this journey. We do not know where they will go and we do not know how it will end, but we are being given a glimpse into a future. Will it be a troubled one? Will it be a beautiful one?

Environmental catastrophe and change beyond what humans can contemplate is clearly on all of their minds. And it is fitting that it would be Chinese artists who bring to this urgent global crisis a particularly speculative touch. The Chinese artistic tradition has always prided itself in exploring the deep and integral relations between the human and the non-human, in the inseparability between ourselves and the "natural" world which we inhabit. Just as that inseparability is becoming inevitable the world over, it is ever present in the works of these Chinese artists.

Yi Xin Tong dropped out of his undergraduate studies in geology in China and transferred to the Bachelor’s art program at Simon Fraser University in Vancouver, Canada, before obtaining an MFA at NYU. Born and raised at Mount Lu in Jiangxi province — the historic summer retreat of political elites since the early 20th century, Tong’s work attempts to capture the ethereal quality between humanity’s everyday life practices and the immediate natural world at our fingertips. One of Tong’s current preoccupations is with the traces of human inhabitation in the abandoned zoo at Mount Lu National Park. Built by the socialist government in the 1950s and abandoned in the 1990s in the throes of economic transition, the zoo’s boutique modernist buildings today appear to house humans instead of peacocks and pandas. Who are these new people, who have, through their environment, transformed themselves into animals? Are they like the animals who were themselves transformed by being caged in the zoo? Or are they like the humans in the town nearby who were transformed by vacationing in the abandoned European villas built by missionaries long ago? Prompted by the surreal condition of humans living in a zoo, or a bird living in his artist's studio, or a fish he has caught as a fisherman, Yi Xin Tong explores by capturing traces of everyday life—theirs and ours, and speculating on the nature of our mutual transformation. He redraws the modernist “zoo” buildings as if they contain some secret, as if they really were a “machine for living” for both human and animal. Who are we? And who will we be? Are we remade by our worlds and can a new world remake us?

Future Host, the singular name behind the two female artists Connie Kang and Tingying Ma, also explores our potentiality for transformation as humans, but they do so by delving into the barely remembered recent past. Connie Kang is a native of Beijing who studied comparative literature and visual anthropology at Columbia University, while Tingying Ma is a Chengdu native who studied theatre and playwriting in Beijing Central Academy of Drama before completing an MFA in playwriting at Columbia. Combining their considerable skills into an interdisciplinary practice of embodied research and movement-based choreography, Kang and Ma are vexed with belonging to a generation of only-children, all of whom experience an existential loneliness collectively. The name "Future Host" denotes a generation in the singular that is carries within itself the uncountable demands of the past upon the future. Future Host’s work thus attempts to cathartically and viscerally reveal the embodied alienation of their generation, staged unexpectedly in everyday spaces like streets and subway stations and galleries, but incarnated by dancers in convulsive, fighting movements and speech acts that lurch towards an unknown. They are currently building upon their work by researching the ancient Chinese breathing exercise regime of Qigong and its popularity in the 1980s and 1990s. Drawing on the embodied soundscape of that period in their childhood, they attempt to rediscover the collective bodies of qigong, once animated by our breathing and our verbal proclamations. Like Yi Xin Tong’s attraction to the zoo of Mount Lu, Future Host also speculates on how a new world will remake us, but they do so gesturing at how an old world may have already done so, deep inside our bodies.

Liu Xin is an artist fascinated by what’s already inside our bodies––and the processes by which these parts might be extracted. She has engineered her own tears, she has made a book of her own DNA, and currently she is sending her own extracted tooth to orbit earth. Liu studied engineering at Tsinghua University before studying art at RISD and then MIT’s MediaLab, and her practice delves into the material processes of technology and engineering while untethering the conceptual binaries produced by the art-science opposition: organic-inorganic, emotional-technical, mechanical-biological. Three years ago, she saved the molars that were extracted from her own mouth and is currently developing several projects around them. One is the construction of a robotic device housing one of these extracted teeth. This device moves in a dancelike motion, sending out streams of magnetic threads like a spider, which low gravity will generate a mesmerizing visual trace. She plans to send this "avatar" of herself into orbit—to a place that is not a new world, but a part of the world that is increasingly better known to us humans. Liu envisions the event serving like a ritual ceremony for her own spiritual existence, but it is also the speculative nature of her unfolding project that is enrapturing. Where and when does “Liu Xin” end and her avatar begin? Like Future Host, Liu Xin’s work explores the existential abyss of being “only” a unique individual, one that is inconsequential in any scheme of things, except that of their own.

Within this group of artists, He Kunlin's practice appears to be most like a traditional Chinese artist, for his primary practice is that of painter, with the lyrical, amateurish aesthetic of a literatus. And like many ink painters of modern China, He Kunlin is engaged with the most serious questions of modernity: What is the import of history? What is the social reality of technological change? First trained in architecture at Huazhong University of Science and Technology, He Kunlin studied visual art at the San Francisco Art Institute, where he developed a multimedia practice centered in ink painting. His exploration of the legacy of modern Chinese painting is enriched by contemporary concerns; in past projects he interrogates masculinity in a hyperreal, technologized world, or psychological trauma in landscapes scarred by wildfire. In a current project, He Kunlin reflects on the “technology fever” surrounding a second “race” to the moon, a human project that has animated modern society more than once. Returning to the paintings of moon exploration by the great Chinese modernist painter Liu Guosong, He Kunlin uses his own engagement with the past of Chinese modern painting to comment on the past of contemporary Chinese technological dreams. Like Liu Xin, He Kunlin draws our attention to the near-space of earth's gravity and the just- beyond. It is this steadied location within our known world, and that pull towards the nearest boundary, that the two artists highlight as a collective desire. If everything old is always new again, how do we find fortitude in what we are already?

In American science fiction, there is sometimes imagined a Chineseness that will infuse a future utopia or dystopia. Perhaps Cantonese will be the lingua franca of a rollicking multiverse. Perhaps kung fu gallantries will be the honorable way to resolve conflicts. To an American audience, it might seem notable that, as a group, these five artists each left behind the overly instrumental mode of academic training in China, and found in American universities a space for a more speculative practice. And yet, to a Chinese audience, it might also seem notable that they have also adopted some of the most useful American technologies of communication and design, and reinvested them with the most essential Chinese concepts of the human. Here, such nationalistic lenses are not altogether inaccurate or mere stereotyping. For if one can provide the other with a means for self-critique, then there is something to be gained from this most rudimentary purpose of cultural exchange and artistic mobility. But the work of these five young Chinese artists point to a futuristic path we are already on. In this world, the boundaries of human and animal, the body and the breath, the earth and the moon, the past and the present, are conditions that we already have the tools to explore, and soon, where we were born and where we were trained will have to just be what we have at hand. A more urgent challenge is already on the horizon.

Future Host Future Host is a New York–based performance ensemble named after an epithet commonly bestowed to children in official socialism, who are posited as the site, agent, and product of socialist futures. Their performance appeared at the Museum of Chinese in America, The Knockdown Center, Movement Research, The Dixon Place, TPAM Performing Arts Festival in Yokohama, Japan, Ullens Center for Contemporary Art in Beijing.

Xin Liu Born in.1991 in Xinjiang, China, Xin Liu is an artist and engineer, whose research-based projects range from performances, apparatus, installations to scientific experiments and academic papers. She is currently the Arts Curator in Space Exploration Initiative in MIT Media Lab, a member of New INC in New Museum and a resident in Queens Museum Artist Studio program. She is a recipient the Van Lier Fellowship from Museum of Arts and Design, Huayu Youth Award Finalist, Queens Museum studio program and Pioneer Works Tech Residency. Her projects have received awards in SXSW, FastCoDesign, Core77 and her academic publications were nominated for best papers in ACM conferences.

Kunlin He Born in 1992 in Nanchang, China, Kunlin He currently lives in San Francisco, CA.  His work focuses on redefining Asian identities, territories, borders, nationalisms, as well as Chinese masculinity in traditional art and philosophy. He is a graduate fellow and affiliated artist at Headlands Center for the Arts (2017-2019) and attended the Skowhegan School of Painting and Sculpture in 2018. His work has been included in exhibitions at the Drawing Center, Chinese Culture Center of San Francisco, Pennsylvania State University, among others.

Winnie Wong is a historian of modern and contemporary art and visual culture. Her writing engages with Chinese and Western aesthetics, anthropology, intellectual property law, and popular culture. She is the author of Van Gogh on Demand: China and the Readymade (University of Chicago Press, 2014), which was awarded the Joseph Levenson Book Prize in 2015. Her articles have appeared in positions: asia critiques, the Journal of Visual Culture, Yishu: Journal of Contemporary Chinese Art, and she has written for Omagiu, Third Text Asia, and Artforum. Her work has been translated into Portuguese, Romanian, and Japanese. Her research has been supported with grants from the ACLS, SSRC, CLIR, Harvard Milton Fund, and Radcliffe Institute for Advanced Study. Winnie was a Senior Fellow at Dartmouth College, and received her SMArchS and PhD in History, Theory and Criticism from MIT. She was elected a Junior Fellow of the Harvard Society of Fellows (2010–13). She is currently associate professor of Rhetoric and History of Art at the University of California, Berkeley.