Rebel as Creator: The Art of Liu Kuo-sung and His Students 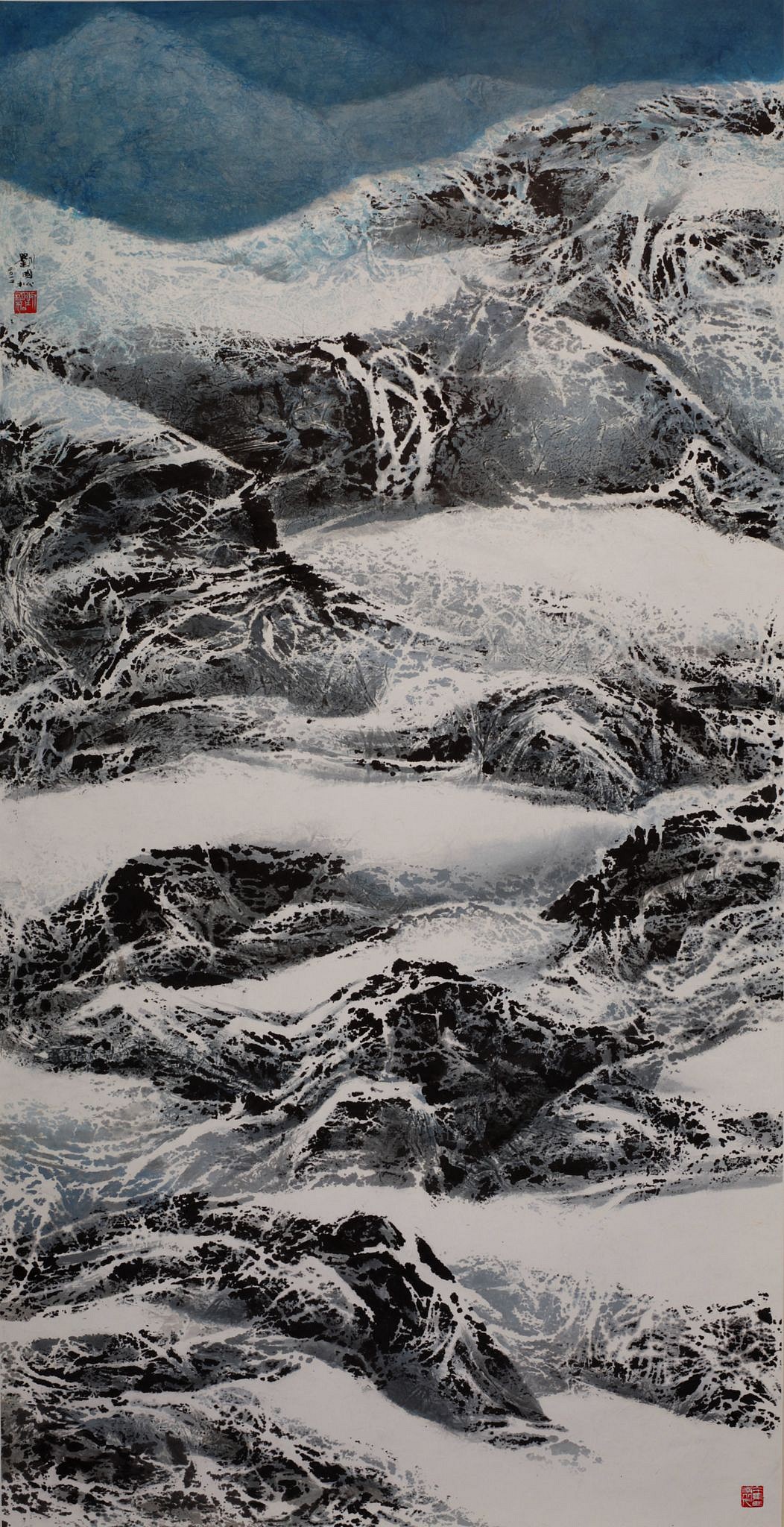 Rebel as Creator: The Art of Liu Kuo-sung and His Students

July 11, 2014 (Millbrae, CA) – NanHai Art is pleased to present Rebel as Creator: The Art of Liu Kuo-sung and His Students. This is the first San Francisco Bay Area exhibition of Master Painter, Liu Kuo-sung. Widely regarded as the “Father of Modern Chinese Ink Painting,” Liu will exhibit a series of three new paintings alongside sixteen works by eight of his students including: Chen Yifen, Chiang LiHsiang, Lin Shaingyuan, Lien Yu, Luo Zhiying, Wu Peihua, Xu Xiulan and Zhang Meixiang. NanHai Art (520 Broadway, Millbrae, CA 94030) will host an opening reception on August 9th at 2pm. Master Liu Kuo-sung will be present at the opening to speak about his artistic journey.

Heralded as a master of Modern Chinese Ink Painting and a pioneer in his field, Liu Kuo-sung was born in Anhui, Northern China in 1932, and attended the Taiwan Normal University, graduating from the Fine Arts Department in 1956. Early in his career, Liu came to be known as something of a renegade when he abandoned the traditional painting learned during his art education in order to pursue a Modernist style more in line with European and American painters of the era than his Chinese peers. Fraught by critics who branded him a rebel and Westernizer, Liu was dangerously labeled a political subversive for his artistic rebellion.

While Liu began to enjoy some international success as an oil painter, his ever-inventive spirit led him into another challenge. Dazzled by the power of a 1960’s exhibition of Song Dynasty landscape paintings in the collection of the National Palace Museum in Taiwan, Liu was inspired to hold Modernism up against China’s own artistic tradition. Liu determined that an artist must not wholly imitate the new nor the traditions of the past famously asserting, “To imitate the new cannot substitute for imitating the old; and to copy the West cannot substitute copying the Chinese.” Subsequently, the artist discovered a way to embrace tradition as well as innovation and created his signature style, neither Eastern nor Western, but entirely Liu, breaking many barriers for future Chinese artists.

The Liu style, which in itself is a paradox as his work is consistent only in its state of flux, began with his 1960’s bold, gestural, and self-expressive calligraphic abstraction series, in keeping with international trends of the time, while using the materials, formats, and motifs of Chinese painting. Liu’s experimentation later turned to his materials, ink, paper and brush, each of which he reinterpreted. To create works like Natural Meshy White Lines of Snow Mountains and Late Autumn the artist used the paper, peeling away fibers to “paint” the lines that make up the ridges and contours of the rocky face. Other works, such as Moon’s Metamorphosis point to his most profound innovation, the discarding of using a brush entirely. This reforming of zhongfeng (the use of the middle part of the brush tip) as well as his moving beyond the brush itself has had a particularly enduring impact. From this fruitful skepticism, a series of innovative ways of creating images were born, namely the water rubbing paintings and steeped ink paintings (a modified monoprint technique). Liu’s inventiveness has continued into the new millennium with his mesmerizing Jiuzhaigou Series and Tibetan Suite Series.

Amongst his students, the Liu influence is particularly apparent in the web of line work in pieces like Wu Peihua’s Leaping White Line Series, or the cascading movement and medium driven abstraction of Chiang LiHsiang’s Mountains and Streams After Rain, but it is Liu’s insistence that his students cultivate their uniqueness, even before mastery, an approach to art education that remains controversial to this day, that makes Liu as revolutionary a teacher as he was an artist.

Speaking about receiving an invitation from NanHai Art's Director, Edward Gui, to exhibit for the first time in the Bay Area, Liu Kuo-sung remarked, “I decided to host my first exhibition in the Bay Area with NanHai Art because I was touched by its mission and I am confident they will play an important role in presenting Chinese art to a broad audience.”

In presenting Liu Kuo-sung alongside the works of eight students at NanHai Art, Rebel as Creator offers the distinct opportunity to review the current state of Modern Chinese Ink Painting and the enduring impact of Liu. These eight artists, celebrated in their own right, demonstrate a masterful learning of the techniques and styles developed by their teacher, while also embracing the mandate to experiment with their work and develop their own singular creative vision. Ultimately, consideration of the artist’s role as a teacher is essential, itself another unconventional move for such an illustrious artist to teach and reveal his techniques, in reviewing the countless and immeasurable contributions Liu Kuo-sung has made to Chinese art and the entirety of art history itself.

A native of Shandong, Liu Kuo-sung was born in Anhui, China in 1932. He moved to Taiwan in 1949 and graduated from the Fine Arts Department of Taiwan Normal University in 1956. Universally recognized as one of the earliest and most important advocates and practitioners of modernist Chinese painting, Liu is known as the “Father of Modern Chinese Ink Painting" in Taiwan and the "Pioneer of Modern Chinese Painting" in Mainland China. Liu has taught at Chung Yuan University, Chinese University of Hong Kong, and Tainan University of the Arts. He was also a visiting professor at the University of Wisconsin – Stout and the University of Iowa. Currently, he is a Chair Professor at the National Taiwan Normal University.

Liu has exhibited extensively across the world. His works have been collected by over 60 museums and galleries, including the Palace Museum in Beijing; the British Museum in London; Asian Art Museum of San Francisco; the Art Institute of Chicago; and the Museum of Asian Art in Berlin. In addition, Liu has won numerous awards and grants, including the John D. Rockefeller III Foundation grant in 1966 that allowed him to travel around the United States and Europe, First Prize for Painting at the Mainstream ’69 USA, the Special Award in the Sixth National Art Exhibition in Beijing, the National Award for Arts in Taiwan, and the Award for Lifetime Achievement from the China Arts Awards. Liu’s artistic achievements have been noted in eleven Art History books, published in China, the United States, Britain, France, and Switzerland.

Chen Yifen, born in 1957 in Yilan, Taiwan, is a member of the Ink Painting Group at the Department of Fine Arts at Taiwan Normal University. Ms. Chen was introduced to traditional Chinese landscape painting at an early age and eventually chose to focus on modern ink painting. Her works subtly integrate creative techniques and elements into traditional Chinese landscape paintings, allowing her to express the free spirit of Chinese traditional painting while seeking a charm between similarity and dissimilarity. Her works have been exhibited widely throughout China and Taiwan, and she was the 2013 recipient of the Taoyuan Art Exhibition Award.

Chiang LiHsiang, born in 1950 in Tainan, Taiwan, received her Bachelor of Art in Literature and Master in Fine Art in Ink Painting from Department of Fine Arts at Taiwan Normal University.  Breaking the convention of traditional Chinese ink painting, her works are infused with modern creative techniques. Ms. Chiang’s works have won numerous awards nationally and internationally, including the Asian Ink Painting Exhibition Awards in 2002, 2003, and 2004; and the honorary award in the Fourth Taipei International Modern Ink Painting Biennial.

Lien Yu, born in 1952 in Jiayi, Taiwan, Lien Yu graduated from the Department of Painting and Calligraphy Arts at Taiwan University of Arts. , Ms. Lien has held exhibitions in Sydney, Athens, San Francisco, Brussels, Guangzhou, Shanghai, Shanxi, and Shandong, and has received many awards, including first place in the 31st Taoyuan Art Exhibition Award – Ink Painting in 2013 and the Creative Painting Award in the Fourth Taipei Contemporary Ink Painting in 2012.

Lin Shaingyuan, born in 1949 in Zhanghua, Taiwan, is a board member of the Chinese New Generation Art and Culture Exchange Association and the Chinese Global Art Creative Association. Mr. Lin’s works combine the modern techniques of spraying and rendering with the spirit of traditional Chinese ink painting. Breaking the conventional Chinese painting traditions, his paintings depict three-dimensional forms. Lin’s works keep in tact the essentiality of traditional Chinese art while seizing the spirit of modernity, creating a distinctive style. His works have been collected by Fujian Art Museum.

Luo Zhiying, born in 1959 in Taiwan, Luo Zhiying was drawn to the ethereal qualities of Chinese ink painting and is recognized for breaking new grounds by incorporating non-traditional elements into her paintings. She first studied painting with Xiao Jinxing and Yang E’xi. In 2009, she was introduced to contemporary ink painting and began to study under Master Liu Kuo-sung. Her works have been included in multiple exhibitions, and she has also has presented her works at many exhibitions with Master Liu Kuo-sung in Taiwan, Guangdong, and Shandong.

Wu Peihua was born in Taipei. Ms. Wu started learning the Lingnan style of Painting in Hong Kong in 1988 and studied under Master Hu Nianzu in 2001. Currently, Ms. Wu is studying under Master Liu Kuo-Sung. Inspired by Master Liu’s theory of “seeking uniqueness, then be refined,” she combines her observation of transformations of trees in different seasons with her imagination, and then paints the trees by applying the blank-leaving technique. She uses the texture of painting and colors of different forms to express her inner emotional world. Ms. Wu’s works have been shown in numerous exhibitions, including museums and galleries in Taiwan, Hong Kong, Japan, Malaysia, America, and Australia.

Xu Xiulan, born in 1952 in Taipei, received her Bachelor in Foreign Language at Providence Women’s College. She also studied at the Master of Fine Arts Program from the Department of Fine Arts at Taiwan Normal University. Ms. Xu used to teach at Hsing Wu Institute of Technology and Military Police School and now she is a teacher of ink painting. In addition to being featured in numerous solo exhibitions, Ms. Xu’s works have been included in multiple group exhibitions, including the Third National Contemporary Ink Painting Exhibition, Taipei International Modern Ink Painting Biennial, Tainan Art Exhibition, and Contemporary Asian Art Biennial in Japan Beppu-Navi Museum.

Zhang Meixiang, born in 1964 in Tainan, Taiwan, began to study traditional Chinese landscape painting in 2001. She was introduced to modern ink painting in 2010 and showed strong interest and talent in it. In her series of work “Waiting to Observe Flowers”, Ms. Zhang developed her own unique painting style by using bubbles. Ms. Zhang has held several solo exhibitions, including Bursting Bud in Taiwan in 2011 and Garden of Soul in Keelung Culture Center Exhibition Hall in 2012. Moreover, Ms. Zhang’s next solo show Flower Dream will be hosted at the Library of New Taipei City in 2014.

Tuesday-Saturday, 10 AM-5 PM, and by appointment.